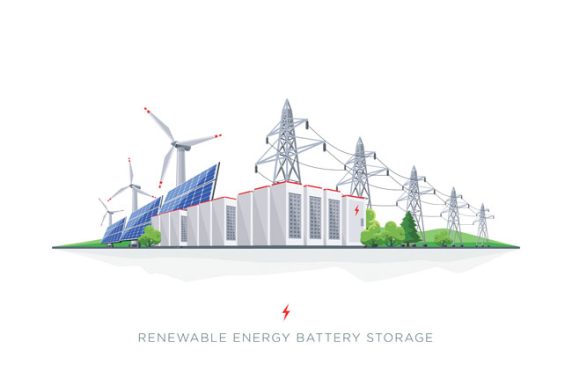 At the end of 2021, according to the “Preliminary Monthly Electric Generator Inventory,” published by the U.S. Energy Information Administration (EIA), the United States had 4,605 megawatts (MW) of operational utility-scale battery storage power capacity.

EIA’s energy capacity data come from its most recent “Annual Electric Generator Report,” which contains data through the end of 2020. “When fully charged, battery units built through 2020 could produce their rated nameplate power capacity for about 3.0 hours on average before recharging,” said the EIA. Its “Annual Electric Generator Report” also contains information on how energy storage is used by utilities. EIA notes that utility-scale battery storage can be used primarily in two ways: serving grid applications, and allowing electricity load shifting.

An additional EIA report, titled “Battery Storage in the United States: An Update on Market Trends,” contains a full description and breakdown of all of the grid service and electricity load shifting applications reported to it.

According to the EIA, power capacity refers to the greatest amount of energy a battery can discharge in a given moment. Batteries used for grid services have relatively short average durations.

A battery’s average duration is the amount of time a battery can contribute electricity at its nameplate power capacity until it runs out. Batteries used for electricity load shifting have relatively long durations. (The EIA calculates a battery’s duration by using the ratio of energy capacity, measured in megawatthours [MWh] to power capacity [in MW]. Energy capacity refers to the total amount of energy these batteries can store.)

Batteries with a duration between four hours and eight hours are typically cycled once per day and are used to shift electricity from times of relatively low demand to times of high demand. “In a region with relatively high solar power capacity, daily-cycling batteries can store solar electricity midday and discharge that electricity during peak electricity consumption hours in the evening when solar power is declining,” said the EIA.

According to research conducted by the EIA, battery operators reported that more than 40 percent of the battery storage energy capacity operating in the United States in 2020 could perform both grid services and electricity load shifting applications. Another 40 percent performed only electricity load shifting, and the remaining 20 percent performed only grid services.

The EIA added that, “According to planned installations compiled in our ‘Preliminary Monthly Electric Generator Inventory,’ we expect battery storage to increase by 10 gigawatts (GW) by the end of 2023.” More than 60 percent of this battery capacity is intended to be paired with solar power plants. “As of 2020, most installed co-located battery storage at solar facilities work to shift electricity loads and have average durations of four hours or more,” said the EIA.