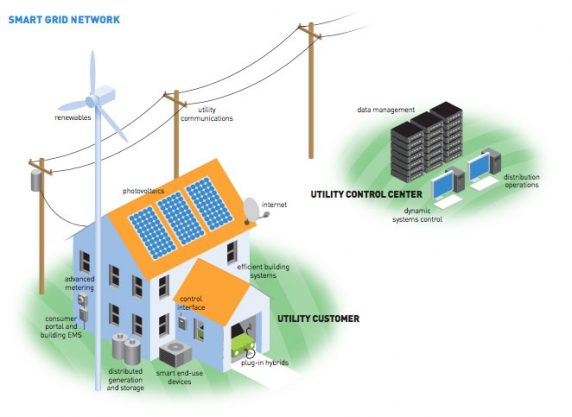 With the increasing role of renewables, particularly wind and solar, in providing generation on the nation’s electric grid, there is concern among some that not enough attention is being paid to the continuing role of traditional baseload generation, primarily coal and nuclear, in ensuring the reliability and resilience of the grid.

For some, the terms “reliability” and “resilience” seem interchangeable, and even stakeholders admit that the industry lacks specific agreed-upon definitions and metrics for the terms.
However, the North American Electric Reliability Corporation (NERC), has been defining “reliability” as a combination of sufficient resources to meet demand (adequacy) and the ability to withstand disturbances (security). Most commonly, “reliability” is measured in terms of system average duration and frequency of outages (SAIDI and SAIFI).

“Resilience,” on the other hand, includes reliability, but also encompasses consequences to the electricity system and other critical infrastructure resulting from increasingly likely high-impact external events. While “reliability” measures often make exceptions for such external events, “resilience” is often viewed as a grid attribute that improves the response to such events.

Concern for the continuing role of coal and nuclear in ensuring both reliability and resilience is strongly apparent among the new leadership of the Department of Energy (DOE), and that interest is causing somewhat of an upheaval in the industry, as well as growing controversy among a number of stakeholders in the industry, particularly those who support the continued growth of renewables.
It began on April 14, 2017, when Energy Secretary Rick Perry issued a memorandum to his staff requesting a study to examine electricity markets and reliability.

The resulting report, issued in August 2017, and titled, “Staff Report to the Secretary on Electricity Markets and Reliability,” not only evaluated the current status of the electricity system, but also focused on what would be required to “help ensure a system that is reliable, resilient, and affordable long into the future.”

One of the objectives of the report was to determine “whether wholesale energy and capacity markets are adequately compensating attributes such as on-site fuel supply and other factors that determine grid resilience, and, if not, the extent to which this could affect grid reliability and resilience in the future.”

The report cited data from the Second Installment of DOE’s Quadrennial Energy Review, noting that the U.S. has about 7,700 operating power plants that generate electricity from a variety of primary energy sources, 707,000 miles of high-voltage transmission lines, 55,800 substations, 3,354 distribution utilities delivering electricity to 148.6 million customers, 6.5 million miles of local distribution lines, and over one million rooftop solar installations.

Following publication of the report, Secretary Perry formally proposed that the Federal Energy Regulatory Commission (FERC) take “swift action” to address threats to U.S. electrical grid resiliency. He urged FERC to issue a final rule requiring its organized markets to “develop and implement reforms that would fully price generation resources necessary to maintain the reliability and resiliency of our nation’s grid.”

Secretary Perry noted that, “A diverse mix of power generation resources, including those with on-site reserves, is essential to the reliable delivery of electricity, particularly in times of supply stress such as recent natural disasters. My proposal will strengthen American energy security by ensuring adequate reserve resource supply, and I look forward to the Commission [FERC] acting swiftly on it.” He added, “The Commission needs to act swiftly to ensure that the resilience attributes of electrical generation from facilities with on-site fuel supplies are fully valued.”

He continued, “It is apparent that in today’s competitive markets, certain regulations and subsidies are having a large impact on the functioning of markets, and thereby challenging our power generation mix. It is important for policy makers to consider their intended and unintended effects. Federal and State policy makers must continue to work together in close consultation to address these important issues that have a deep impact on grid reliability and resilience.” He also noted that, “We must utilize the most effective combination of energy resources with an ‘all of the above’ approach to achieve long-term, reliable American energy security.”

There has been some backlash to Secretary Perry’s directive. For one thing, some critics noted, while the report did not find a clear link between retiring coal and nuclear power plants and reduced grid reliability, the DOE is asking FERC to presume that this is the case, and create a rule that could provide coal and nuclear plants with additional financial support, possibly at the expense of natural gas, solar, wind, and other alternative energy sources.

Secretary Perry’s Notice of Proposed Rulemaking (NOPR), released September 28, proposed new regulations that would require ISOs and RTOs to amend their tariffs to provide specific rates for “grid reliability and resilience resources” for the purchase of electric energy from these resources and the recovery of costs and a return on equity for those resources dispatched during grid operations.
Secretary Perry asked FERC to respond to his NOPR within 60 days, which some considered to be too short a period of time, in that it would provide little time for stakeholder participation in the process.

On October 4, a written FERC announcement stated that it was “notifying all interested parties that initial comments are due on or before October 23, 2017, and reply comments due on or before November 7, 2017.”

A number of energy industry associations noted that this NOPR is “one of the most significant energy industry proposed rules in decades,” and, given its importance, they requested that FERC provide at least 90 days for initial comments, afford an additional 45 days for reply comments, and convene a technical conference before the comment deadline in order to allow affected parties the opportunity to better understand key aspects of the proposed regulations. FERC did not honor these requests.
One early response to FERC’s request for comment was from the Sierra Club, which noted that the Federal Power Act “clearly states that FERC cannot favor one energy source over others in its rulemakings.”

Comments from NERC came in on the deadline – October 23. In part, NERC noted that, “Reliable and resilient operation of the BPS [Bulk Power System] requires a balanced portfolio of diverse generation resources that provide adequate capacity and essential reliability services to meet consumer needs and support the system. The right combination and amount of resources and transmission together maintain adequacy of the system.” And, a particularly important statement: “The changing resource mix is altering this combination, influencing the operational characteristics of the grid and challenging reliable system planning and operation.”

Still, NERC added, while the changing resource mix is challenging system planning, “resource diversity improves resilience. The reliability benefits provided by resource diversity can be even greater when policies and market rules recognize the value provided by essential reliability services and support greater fuel assurance by encouraging firm transportation, multiple pipeline connections, and dual-fuel capacity. Recognizing the reliability benefits provided by all generation should help ensure that the generation resource mix continues to evolve in a manner that avoids creating risk to reliability of the BPS.”

NERC noted that coal and nuclear generation serve a critical reliability function within the diverse resource mix “by providing secure capacity to serve firm load and support reliability and resilience of the BPS.” It added, “NERC is continuing to study the reliability implications of coal and nuclear generation retirements and the changing resource mix.” And, another important statement: “While NERC has not identified an immediate or near-term emergency related to such retirements, NERC assessments demonstrate that the ongoing trend reduces system flexibility to respond to events and may affect reliability, increasing risk to the BPS.”

NERC summarized its assessment of the impact of the current generation mix on grid reliability and resilience by noting, “Coal and nuclear generation support reliability by providing dependable capacity, substantial essential reliability services in the form of inertia and voltage control, and fuel security. These reliability attributes balance the variable characteristics of non-synchronous variable energy sources and the fuel sensitivity of both non-synchronous and natural gas-fired resources. Non-synchronous and gas-fired resources also present reliability benefits, such as resource diversity, capacity, and the essential reliability services they can provide. Together, these resources support reliable and resilient operation of the BPS. The Commission [FERC] should continue to pursue policies that recognize the reliability attributes of all resources, and find opportunities to enhance these attributes as discussed herein.”

The next step? During a November 28 interview with the media, new FERC Chairman Neil Chatterjee, while providing no specific information on what FERC’s NOPR (identified as RM18-1) will contain as it relates to what it plans to propose to stave off the premature retirements of coal and nuclear baseload generation, emphasized that FERC does plan to meet DOE’s December 11 statutory deadline for action on RM18-1 “in a legally defensible manner that does not distort wholesale power markets.”

And, in order to avoid what he deemed to be “severe” consequences of learning that certain generation attributes are vital to grid reliability and resilience after plants with those characteristics are retired, Chatterjee reported that there will be an interim step designed to keep struggling coal and nuclear generation units afloat while FERC completes a longer-term analysis of baseload generation and pricing resilience in the wholesale power markets.