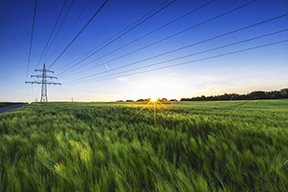 FERC notes that, “Reliability Standards impose requirements on the users, owners and operators of the bulk power system to assure that they fulfill their responsibilities in reliable grid operations, consistent with the basic engineering functions and concepts discussed in the primer.”
The second section, “The Energy Policy Act of 2005,” covers Section 215 of the Federal Power Act (FPA), as well as FERC’s implementation of FPA Section 215 and FERC’s continuing oversight in this area.

Under Part II of the FPA, for example, FERC has historically regulated certain economic aspects of the public utility industry, such as the rates for sales by one utility to another in interstate commerce. Pursuant to the Energy Policy Act of 2005, however, Congress expanded FERC’s role and jurisdiction under the FPA by adding Section 215, which pertains to electric grid reliability. While FERC had previously addressed electric grid reliability in an indirect manner, such as allowing the cost recovery of public utility expenditures that address discrete reliability matters, Section 215 of the FPA now tasks FERC with a direct role over an entire new field of activity.

Section 215 also expands the definition of “users, owners and operators” of the bulk power system. The term now includes federal power agencies, municipal utilities, and rural electric cooperatives – entities that over the years have been excluded from most traditional FERC economic regulation.
The third section, “Role of the Electric Reliability Organization/NERC,” discusses the development of reliability standards, categories of standards, NERC compliance and enforcement, and reliability/adequacy assessments.

While much work has been done related to Reliability Standards, the task is not complete, according to FERC. “Emerging reliability issues require a dynamic program that takes a proactive stance in ensuring ongoing grid reliability. Thus, in addition to maintaining vigilance on fundamentals of grid reliability, such as real-time balancing of load and resources, operating equipment within defined limits, adequate operator training, and tree trimming, emerging areas of concern such as cybersecurity and changes in the nation’s resource mix continue to require FERC’s attention.”