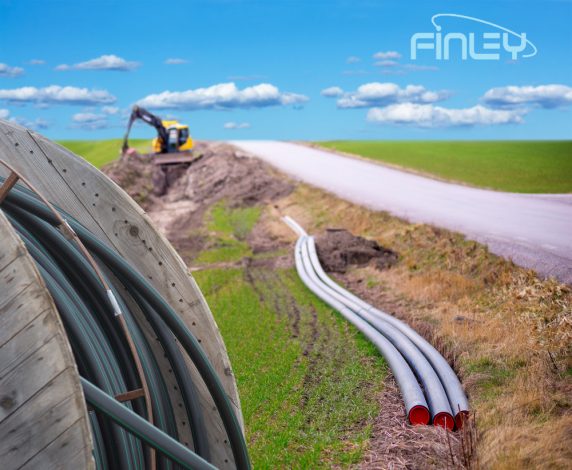 Expanding quality broadband access to all parts of rural America has become a critical public policy objective for the U.S. Broadband access is now considered a critical utility, equal to electricity or water, for any community, giving it a chance to participate and thrive in the global economy. Increasingly, rural electric cooperatives are seen as a necessary participant to help achieve this important objective.

Many years ago, the staff of Barry Electric Cooperative (BEC) of Cassville, Missouri began hearing from their members about the lack of quality broadband in their service territory. Some were unfortunately still using dial-up technology to access the Internet. BEC also noticed an increasing number of their peer electric cooperatives were building broadband networks. After some extensive study, and with the help of Finley Engineering, BEC decided to embark on an ambitious journey – one that would eventually bring that desired broadband Internet to their rural communities.

BEC’s broadband journey began with a feasibility study conducted by Finley, an important first step for any new broadband project. The results of the study were favorable, so BEC embarked on developing a plan to launch service to its entire service territory, which serves 6,700 members and operates 1,100 miles of electricity lines. BEC decided to launch a new broadband brand for the service, calling it goBEC.
The plan called for eight phases and was originally expected to be completed by 2021. goBEC is now into phase 6 of the plan and expects to have the project completed by 2020. BEC is building a GPON-based fiber-to-the-premises (FTTP) network, based on a 1×32 split architecture, all delivering gigabit capable triple-play service to 100% of its members. A 10G MPLS-based fiber ring provides the backbone for BEC’s fiber broadband network.
The business case for building FTTP in rural markets can be difficult. It’s a tough business and often requires access to government sponsored loan and grant programs to make it work. BEC went down this path and pursued some of these opportunities, with Finley’s support.
Pursuing those government sponsored funding opportunities can be complicated and requires expertise and knowledge. “A lot of rural electric and telephone cooperatives don’t have the needed expertise and experience, and need a consultant to help them,” says JR Smith, goBEC’s fiber network manager. “For us, that was Finley Engineering. They were a great help.”

BEC decided early in the process to partner with other service providers to round out their triple play offering, which they were determined to deliver to all of their members. Both traditional linear TV and landline phone services remain important in BEC’s service territory, where local broadcast TV signals don’t reach, and poor cellular coverage is common. Recognizing they lacked expertise in certain areas and could also significantly reduce their capital expenditure budget, goBEC partnered with CoMo Connect for their IPTV-based video service and Pinnacle Telecom for their residential and business phone services.

By partnering with CoMo Connect, goBEC did not have to build and maintain an expensive video headend, saving potentially millions of dollars. Additionally, partnering with Pinnacle Telecom saved goBEC from having to invest in their own softswitch for voice services.

Residential and business voice services are SIP-based, providing great quality and clarity, Smith noted. Voice provider Pinnacle Telecom, based in Fort Smith, Arkansas, offers wholesale voice services to a number of service providers on a regional basis, including a couple of other electric cooperatives.

Pinnacle Telecom offers IP voice services to its wholesale customers like goBEC through a softswitch, allowing the full range of calling features for both residential and business customers. Through SIP trunking, Pinnacle Telecom can provide quality voice service through both direct managed connections to their service provider customers, or, as in goBEC’s case, across an open unmanaged Internet link.

Partnership has been key to goBEC’s initial success. It has allowed them to focus on building their broadband network and servicing members, while leaning on the expertise and capabilities of partners to deliver key services. In so doing, goBEC has avoided costly network expenses, lessened network management headaches, and got to the market more quickly with a competitive triple play offering. All while getting established and proven voice and video products.

With about 50% of network construction complete, goBEC is well underway with their fiber broadband project. The company offers three service tiers of 250 Mbps, 500 Mbps, and 1 Gbps. The most popular service is the 250 Mbps tier, which starts at $50 per month. All broadband tiers can be bundled with voice and video service. Overall goBEC is seeing about 30% penetration for its services across their territory, and the project is already cash flow positive.

In rural markets, goBEC is exceeding their business plan projection for take rates. Within larger towns, goBEC is facing stiffer competition, where they face CenturyLink and Mediacom. Both of those competitors saw goBEC coming and began locking customers into longer term contracts. As a result, many potential customers are off limits for a while. But the trending line looks good for goBEC, as they are converting many of those customers as they come out of those long-term contracts.

One key driver for launching a fiber broadband network is the potential for smart grid opportunities. As the network is being constructed BEC is connecting electric grid network elements to their new fiber network. For example, BEC is connecting regulators in the field, giving them the ability to better monitor and manage the load, especially during peak times.

BEC is also currently evaluating smart meter solutions for future deployment. But in the interim, goBEC is able to monitor the fiber network which helps BEC determine where there are power outages or issues. It doesn’t allow them to monitor down to the individual meter yet, as a true smart meter solution will eventually do, but it does allow them to determine geographic locations where power problems may be present, greatly improving their troubleshooting process.

Eventually, BEC intends to leverage the full power of their new fiber broadband network to inject smart grid capabilities across their entire footprint. While it’s still early in this process, BEC is very enthusiastic about its smart grid prospects.

With any new project like goBEC there will be key lessons learned that could be helpful for others as they look to potentially launch a similar effort. Smith offered a few learned by goBEC. They include:

• Make Ready Costs – Don’t overlook or under estimate “make ready” costs. The costs of ensuring proper easements and rights of way issues, not to mention upgrading poles for a FTTP network, are significant. They require many man hours and should be accounted for in your business plan to avoid surprises.

• Staffing Requirements – Operating a fiber network requires different skillsets than what an electric cooperative may possess and determining whether to hire staff or outsource expertise for critical services like customer service and marketing must be well thought out and planned.

• Consultants – Having an expert consultant with fiber broadband experience like Finley Engineering for not only the engineering requirements, but also the expertise of navigating all of the requirements for obtaining funding, played a critical role for goBEC’s success.

• Don’t Be Afraid to Partner – There are a lot of moving parts with launching and operating a fiber broadband network and you shouldn’t be afraid to partner with companies who already have expertise in certain areas. goBEC’s partnership to deliver voice and video have been very beneficial.

• Pay Attention to Competitors- Broadband is a very competitive business and competitive research is necessary, both pre-launch and after. Be prepared to compete for the business and don’t rely on just the fact that you are the local provider.

Building this new fiber broadband network is an important undertaking, with significant implications for BEC and the rural communities it serves. The benefits are numerous, and in addition to giving BEC more tools and services to better serve their members and support community economic development, the arrival of goBEC is also important to the long-term future of the cooperative.

Broadband is seen as an important diversification strategy for the cooperative, providing additional revenue streams over their core utility business. The utility industry does have some unpredictability associated with it, especially as more renewable energy sources like wind and solar come online. Adding broadband to the portfolio adds some long-term stability. “If you invest in a fiber network, you’re adding some revenue predictability,” says Smith