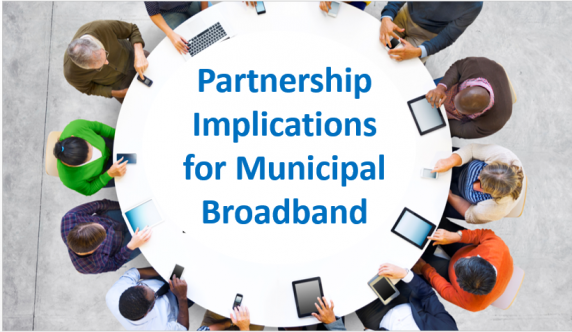 A growing number of municipals and local government affiliated entities are exploring the role of broadband in their respective communities. Many are choosing to facilitate the upgrade of existing networks or even building and operating new broadband networks. This whitepaper outlines and discusses this growing trend and offers insight into potential partnership opportunities presented to existing broadband service providers.

According to the website Community Networks, there are approximately 450 communities across the country with some form of municipal broadband participation. Of these 450 municipal networks, 83 operate a publicly owned FTTH network, reaching most or all of the community. Over 50 communities in 19 states have a publicly owned network that offers broadband of up to 1 gigabit per second (Gbps).

While municipally owned networks have been around for many years, they have recently taken on heightened momentum. There are many reasons for  this growing activity, including the introduction of Google Fiber from Alphabet. Google Fiber challenged the definition of high speed broadband and invited communities to basically compete to bring this new gigabit FTTP network to them. This development emboldened communities from across the country to evaluate their own broadband capabilities to ensure they could keep pace with Google Fiber and the added economic development they perceived a Google Fiber type network would bring.

Communities now routinely issue RFIs and RFPs for gigabit style FTTP networks, inviting incumbent service providers or other entities to join with them to implement better broadband networks for their communities. In many instances, communities are taking matters into their own hands and committing to build and operate broadband networks. This movement has created a growing ecosystem of vendors, organizations, consultants, and government entities, all encouraging and facilitating municipal broadband in its many different forms. Due to this rapidly growing ecosystem and new organizations entering and capitalizing on this industry, it is recommended to embark or proceed with caution to ensure that an entity/vendor/consultant has a large amount of past experience and credentials before hiring or partnering on these projects.

This trend has created potential partnership opportunities for existing service providers. But careful planning and thoughtful collaboration must take place before any partnerships can truly take hold. There are a growing number of requests for feasibility studies and broadband master planning from communities and municipalities from all across the country. Some RFPs are further along than others and are requesting full engineering services for network buildout. Most of these requests do embrace some form of public-private partnership (PPP), hoping to bring in partners for the planning, building, and/or operating of the network.

There are many advantages in a public-private partnership approach. In Finley Engineering’s broad experience with PPPs, we find these distinct advantages:

A growing number of electric cooperatives are exploring PPPs, and they bring many of these advantages to broadband network partnerships. They are well capitalized and not looking for quick returns. They have existing infrastructure that can be utilized for broadband network build-out and operation. They also have a commitment to their community.

There are differing types of PPP arrangements. They include:

• Commercial Business/Gov’t Partner – a limited PPP arrangement where a variety of arrangements (or even bartering) can be made between a commercial entity and a local government. Providing service to government facilities in exchange for rights-of-way is an example.

• Joint/Shared Construction – a more common approach for government and service providers to jointly build facilities that are then shared between the two of them. School districts are a great example, where they partner with a private provider to build a network that they can both use for their own purposes.

• Open Access – a growing approach is where a local government or municipality builds a broadband network for wholesale purposes, allowing multiple service providers to then rent or lease capacity of that network to provide retail network services to homes and businesses. This approach makes some logical sense, but they have a very mixed track record.

• Dark Fiber – similar in some ways to open access, a number of communities are building dark fi ber capacity, and primarily targeting businesses and carriers and leasing fiber capacity to them.

• Joint Venture – a business entity is formed and jointly owned by business partners who build and operate a network.

• Management Contracts – these typically occur when a municipality owns a network, but enters into a management contract with a separate entity to operate it.

While these arrangements vary, there are some very practical considerations that apply to all of them. The most important is to recognize and understand the fundamental difference between partners in a PPP arrangement. By their very nature, they include government and private entities, who have very different rules of engagement, cultures, priorities, and missions. Some of these differences vary, with community size playing an important role. In larger communities, these differences can be more pronounced, while smaller communities are more nimble and can be more flexible.

There are a core set of issues to consider and prepare for when dealing with government entities in a PPP arrangement. These issues include:

• Politics – the political environment is wrought with challenges for business operations and decision making processes. Therefore, it’s recommended that a business structure be established that purposely avoids political involvement, allowing the entity to make decisions without needing political approval or go through political processes like city council votes. A good ‘iron-clad’ agreement/contract is encouraged which specifically spells out roles, responsibilities, and political involvement. It’s important to recognize that political posture can change, through the electoral and/or appointment process. Any agreement should ensure it can withstand political change.

• Ordinances – depending on the government entity’s charter, a new ordinance may be required to enter into a PPP with another entity.

• RFI/RFP – some government entities require or strongly encourage RFI/RFP approaches for broadband network partnerships. This process may occur even if a partner has already been identified or even engaged, so private entities should plan for this possibility.

• Citizen Involvement – citizens can be very vocal at times, especially when they oppose a certain project or direction being considered by a government entity. Private partners should be prepared for opposition, including very vocal opposition to the project.

• Local Press – anytime a government entity is involved, the local press will report on it. This reporting can include details about business partnerships and arrangements that private entities are not used to. When effectively engaged, the press can be an ally for a PPP.

• Large Incumbents – large incumbent providers are generally not in favor of PPPs for broadband networks. They may vocally and covertly oppose a PPP, even if it does not compete with them directly. They simply don’t like the precedent a PPP sets. Large national carriers have considerable political power and can create serious opposition to PPPs.

• Financial/Accounting Considerations – government entities have varying rules about how they can participate in PPPs from an ownership and operational perspective. Some may be prohibited from owning a portion of a PPP and/or may be shielded from any financial losses. This can create some tension because they want certain rights as a part of the PPP, but are shielded from downside risk. They also may have onerous purchasing and accounting methods that should be avoided if possible.

• Documentation – government entities may have rules that enforce public disclosure of all documents that involve said government. That means anyone, including PPP competitors may request access to documentation of the PPP. Special considerations regarding the publication and sharing of PPP documentation needs to be adhered to, so PPP documentation is not unnecessarily exposed.

• Exit Plan – as is the case with any business partnership, having a defi ned exit plan is prudent. This is especially true of broadband network PPPs, where a multitude of issues can impact the viability of the partnership.

All of these issues can be effectively managed, but only if properly understood and planned for.

Perhaps the most important issue for effective PPPs is determining and implementing the proper funding mechanism to build and operate a broadband network. Due to the very nature of a PPP and the parties involved, financial structure may vary or differ from private commercial projects. It’s important for both sides to understand each other’s unique position. For example commercial entities are unfamiliar with government bond financing.

One step in creating a successful PPP is to determine the value of the contributions from the various partners, which can be more difficult with a PPP since many governmental entities are prohibited from taking ownership in a PPP or any related profits or losses generated by the partnership. On the positive side, governmental entities do have the advantage of having access to unique tools, tax strategies for example, to manage profit and losses that are not available to private businesses. Valuation of a PPP over multiple years can also be challenging because governments open and close their books every year making it difficult to reconcile with a private partner who is typically focused on projecting long term periodic interest bearing withdrawals across future years.

Bond financing, often a preferred method of government infrastructure financing, can be problematic within PPPs. They often require approval from the governed community in the form of a popular vote. If approved, the bond starts accruing interest immediately upon issuance. If the buildout takes up to a year or more to accomplish with some of the larger investments delayed until the end of the year, the added interest payments may impact the financial viability of the project.

On the flip side, government entities are unfamiliar with commercial lending and its equity and/or lien requirements. But there are advantages for a PPP to look at both funding approaches.

Commercial lending can be used upfront to get the project started and save the interest costs over bond financing. But later in the project where there is high capital cost for the heavy construction, bond financing makes more sense. The combination of the two may help a PPP save up to ten percent in interest expenses, which can mean millions of dollars.

Legal research will be required to determine the implications of existing government entity ordinances on a PPP, including whether one can even be formed. Beyond that, ordinances may govern how government entities can participate and those legal issues need to be understood up front.

Additionally, legal research needs to be accomplished at the state level to ensure no state laws prevent a PPP or govern/restrict their operation. There are also legal issues around franchises, rights-of-way management, permitting, and taxation implications that will need clarity.

Local communities are increasingly looking to improve their broadband reality. As a result, a growing number of municipalities are partnering for the development and operation of broadband networks. These partnerships can create interesting opportunities for existing service providers.

With opportunity comes risk, and PPPs are no different. While they may represent an opportunity, they do require considerable planning and execution. Broadband service providers should not enter into these partnerships lightly.

We’ve outlined some key points to consider. We also invite you to talk more in-depth with Finley Engineering. We have considerable experience in the development of PPPs for broadband networks and can offer professional services that can contribute to your partnership’s success.

2. Alphabet is the new corporate parent for Google and Google Fiber, which are separate subsidiaries of the parent company.