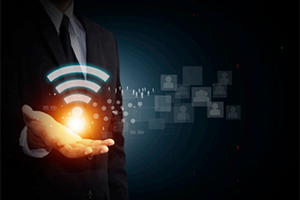 What is Next-Gen Gigabit Wi-Fi? As broadband carriers expand bandwidth capabilities to residential and small- to medium-sized business customers up to a full Gigabit, Wi-Fi technology must follow suit for end users to reap the full benefit of all that bandwidth. Fortunately, next-generation Wi-Fi, officially known as 802.11ac or Gigabit Wi-Fi, is enabling complete end-to-end ultra-high bandwidth solutions.

Gigabit Wi-Fi offers many advantages over previous Wi-Fi technology (see Figure 1). First and foremost, Gigabit Wi-Fi accommodates theoretical throughput of up to 1.3 Gbps in its Wave 1 (Wv1) implementation and up to 3.6 Gbps in Wave 2 (Wv2) using very wide 160MHz channels. Expected actual data rates ranging from 433 Mbps for one stream to 1.3 Gbps using MIMO which provides end users with exponentially more bandwidth than the typical actual data rates of most existing Wi-Fi networks in use today. Gigabit Wi-Fi achieves its superior in-home/business wireless bandwidth capabilities thanks to a switch from previous generation Wi-Fi’s crowded 2.4 GHz spectrum band to the relatively clear and expansive 5 GHz band. The new improvements and efficiencies that Gigabit Wi-Fi is able to provide in the 5 GHz band include the ability to transmit more data per signal due to larger channel sizes and more MIMO streams, significantly increased bandwidth efficiency with multi user MIMO, and much higher speed communication which reduces latency. Enhanced latency is vital to fostering the growth of revenue-generating video applications and other apps that require high-performance wireless networking without delay. The boost for video apps is key as 60% of today’s users already are streaming content to a Wi-Fi connected device in the home or business, according to the Wi-Fi Alliance. Gigabit Wi-Fi also boosts wireless network performance and enhances the end user experience with the introduction of advanced multiplexing and smart antennae technologies such as multiple input and multiple output (MIMO) and 4×4 beam forming.

The need for Gigabit Wi-Fi is growing every day. In addition to extending the growing amount of carrier delivered ultra-high bandwidth services throughout the home, the number of devices that end users are connecting to their Wi-Fi devices is exploding. Not surprisingly, as more devices are connected to Wi-Fi networks operating in the 2.4 GHz band, their ability to provide energy efficient high quality connectivity is compromised or lost altogether. When previous Wi-Fi technologies were introduced, most people were connecting one or two end-devices to their Wi-Fi network. Today, most households have at least four connected devices. In addition to desktop and laptop computers, smart phones or tablets that need wireless access, there is a host of new items ready and waiting to gain access to the growing Internet of Things (IoT) at both the home and office. Fortunately, Gigabit Wi-Fi is arriving in the nick of time. Between the third quarter of 2013 and the second quarter of 2014, approximately 600 end-user products were 802.11ac certified. That number is expected to accelerate significantly over the next few quarters and years. In addition to end devices, Infonetics Research forecasts that 802.11ac access points are expected to dominate the global wireless local area network (WLAN) market by 2018. In the same timeframe, 802.11ac enabled chipsets will be used in the majority of devices that require Wi-Fi connections. Not surprisingly, nearly 46% of the more than 3.5 billion 802.11ac Wi-Fi chipsets shipped in 2018 will be installed in smart phones, according to ABI Research. While the vast majority of 802.11ac chipset manufacturers are manufacturing Wv1 chips at present, Wv2 chipsets currently are being manufactured and integrated into products, too. Some Wv1 chipsets may be able to upgrade to Wv2. While these chips will be in service for the next several years, the Wi-Fi industry currently is working to meet the need for even higher speeds and increased energy efficiency in the future. Standards for 802.11ax, which promises to triple 802.11ac’s throughput, will be ready some time in 2019.

Wi-Fi signals contend with many different factors when it comes to achieving actual vs. theoretical throughput rates. Interference, packet size, the number of access points involved in signal transmission and the distance signals travel all play a role in optimizing or degrading Wi-Fi signals at any given time of transmission. Because 5 GHz spectrum is relatively open compared to 2.4 GHz, Gigabit Wi-Fi signals are typically able to transmit larger blocks of information, and more of them, with less interference. Gigabit Wi-Fi also makes use of up to 256 levels of modulation (256 Quadriture Amplitude Modulation/ QAM) in optimum conditions compared to 64 levels of modulation (64 QAM) used in 802.11n. Combined with smaller guard bands and smarter electronics, Gigabit Wi-Fi allows for transmission of more information per Hertz of each signal. In addition, Gigabit Wi-Fi monitors signal quality from end-to-end, which enables self-correction during each session. MIMO spatial multiplexing enables further enhancements to Gigabit Wi-Fi. MIMO applies unique timing elements that allow a single access point to transmit up to four transmitters in Wv1 gear, and eight in Wv2 implementations. Multiple smart antennas facilitate adaptive beam forming, which basically concentrates a Gigabit Wi-Fi’s power and available data streams toward, or away from, specific users in the home or business. Newer dual-band (802.11ac 5 GHz/802.11n 2.4 GHz) access points are able to use beam forming to favor power users and revert less vigorous users to 802.11n streams to optimize available bandwidth. Wv2 devices also are able to provide users with bursts of extra bandwidth instead of committing end users to the level established at the beginning of a session for its entire length, as is the case with 802.11n.

Gigabit Wi-Fi presents carriers with many revenue generating and churn reducing opportunities. Certainly, robust support for video and content distribution applications is one of the primary forces behind the creation of 802.11ac. Chipsets are being integrated into set-top-boxes to enable wireless IPTV and other premises-based video application distribution. Set top boxes equipped with Gigabit Wi-Fi promise to save time and effort for both carriers and their customers, reducing installation times and simplifying moves and changes. Rapid adoption is expected, with 802.11ac-enabled set top boxes rising from 6% of the market in 2014 to a stunning 67% in 2015, according to Infonetics Research. Outside the home, a number of broadband access equipment suppliers are integrating 802.11ac into their residential gateways and Optical Network Terminals (ONTs). This will allow for seamless wireless distribution throughout the home or office without the need for additional access points. In addition to computers, smart phones and tablets, Gigabit Wi-Fi is expected to be a great enabler of IoT applications. Home security systems, lighting, appliances, medical devices and more will be connected to the IoT by 2020. For these reasons and many more, Gigabit Wi-Fi presents a great opportunity for broadband carriers to engage (or re-engage) customers about broadband capabilities and applications within the home and business. Gigabit Wi-Fi will create a significant Wi-Fi refresh cycle, where end-customers will be replacing existing Wi-Fi equipment, facilitating discussions that can lead to enhanced revenue opportunities for broadband carriers.

The news that Gigabit Wi-Fi has the ability to accommodate many more mobile devices than existing Wi-Fi solutions will be welcomed by businesses in which an increasing number of workers are conducting more and more of their business processes wirelessly. In fact, custom business apps that require quality bandwidth connections currently outnumber all other apps on business use smart phones and tablets. Gigabit Wi-Fi gives carriers an opportunity to help businesses optimize those apps and achieve high-quality ubiquitous access throughout the workplace for all the wireless devices that are now required for conducting everyday business operations.

Carriers also are seeing a sharp rise in the number of their business customers that are deploying amenity Wi-Fi on their premises for the benefit of their customers and clients. No longer relegated to the coffee shop, amenity Wi-Fi is offered by retailers, hospitality and entertainment venues, grocery stores, car dealers, medical providers and more. Gigabit Wi-Fi provides new opportunities to businesses that offer amenity Wi-Fi today, as well as those that want to begin offering it. In addition to providing needed connectivity and offloading signals from wireless networks during peak hours, Gigabit amenity Wi-Fi has the potential to stimulate new revenues. For example, businesses and venues can use it to enable beacon technology, which sends coupons or special offers/announcements to customers’ tablets and smart phones while they are on the premises. A WBA-Marevedis-Rethink survey forecasts that retailers, stadiums and event venues, and transportation hubs will increase their use of Gigabit Wi-Fi more than any other vertical markets over the next year. As their business customers use amenity Wi-Fi for sales and marketing activities, carriers may find opportunities to upsell them data center applications or other cloud services that help to support their amenity Wi-Fi efforts. Others may be interested in having carriers build or manage private or public Gigabit amenity Wi-Fi networks for them. Whatever their needs, most businesses understand and depend on Wi-Fi. Therefore the introduction of Gigabit Wi-Fi presents an opportunity to open a dialogue about growing business opportunities, helping land new and retain existing business customers. Carriers can generate incremental revenue by enabling next-generation Wi-Fi through developing and providing a managed indoor or indoor/outdoor Gigabit Wi-Fi network. Incremental business services include systems integration and professional services to build and maintain Wi-Fi networks for business customers. With 26 billion devices connecting to the Internet by 2020, IoT also promises as yet untold services and revenue generating opportunities for carriers.

Gigabit Wi-Fi enables carriers to differentiate themselves, retain customers and win new ones in the residential market, too. First and foremost, carriers can bundle Gigabit Wi-Fi with their broadband services. They can take it a step further by deploying the technology throughout community networks and offer their customers “broadband anywhere” or Wi-Fi roaming services where they live, work and play. For example a carrier could offer community-based Gigabit Wi-Fi to its subscribers at no charge or provide services to customers and non-subscribers for an hourly, weekly or monthly fee. This sets the stage for upselling of new services and features as carriers deploy Gigabit Wi-Fi ubiquitously throughout their networks and use it to create or accommodate new applications that can be monetized. In the home, Gigabit Wi-Fi offers consumers greater ease of use. Residential customers will appreciate the ability to better manage and add new devices to their networks. They will be impressed with Gigabit Wi-Fi’s robust support for video in the form of HD video streaming to anywhere in their homes as well as its support for other high-performance applications. As carriers continue to increase broadband speeds to the home, many of whom who now offer Gigabit broadband, Gigabit Wi-Fi enables those carriers to offer a comparable true ultra-broadband experience throughout the home. The number of Gigabit Wi-Fi “homespots” deployed by wireline carriers is expected to jump from 75 million units in 2015 to more than 300 million units in 2018, according to a MaravedisRethink forecast.

Gigabit Wi-Fi brings the full capabilities of gigabit networks all the way to the edge of the network via wireless connections that end users depend on today. The significant increases in bandwidth and energy efficiency combined with the ability to accommodate large numbers of devices throughout the customer premises that Gigabit Wi-Fi enables, serve to enhance the end user experience, increase customer loyalty and open up new revenue streams for carriers and their customers. Relatively new applications such as IoT and managed Wi-Fi are among the many applications that will thrive because of nextgeneration Wi-Fi well into the future.

2. Modulation may fall back to a slower modulation scheme in congested or longer distance environments

6. ABI Research, Smartphones will Account for Nearly Half of Both 802.11ac and 802.11ad Chipset Shipments in 2018, https://www. abiresearch.com/press/smartphones-will-account-for-nearly-halfof-both-8

11. Marevedis-Rethink, Carrier Wi-Fi: State of the Market 2014 with the WBA, http://www.slideshare.net/maravedis/wbawebinar-slides-full-deck-dec14