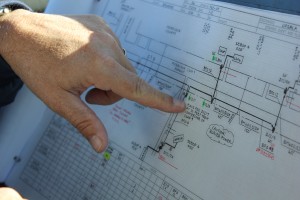 In June 2011, Doyle Beneby, CEO of San Antonio, Texas-based CPS Energy, made the  announcement that the largest municipally owned utility in the country would become “unapologetically aggressive” in pursuing local economic development.

The plan was to leverage billions in buying power to bolster local job growth and infrastructure development, protect the environment, increase energy effi ciency, and diversify the utility’s energy portfolio in the face of increasing regulation.

CPS Energy’s initiative is called the “New Energy Economy,” and, three-and-a-half years later, it has been paying off handsomely for San Antonio.

By the close of 2014, CPS Energy had partnered with eleven clean energy companies, four of which have moved their headquarters to San Antonio. As of April, 2015, more than 700 new jobs have been created, generating almost $40 million in payroll, and capital investments of $137 million are yielding an annual economic impact of more that $680 million. When direct and indirect jobs are tallied, job totals soar to 3,797. The economic impact expands to $1.1 billion with multiplier eff ects taken into account. In addition, the companies have invested $2.6 million in science, technology, engineering and math (STEM) education programs and $15 million in the development of the EPIcenter (Energy Partners Innovation Center).

As the New Energy Economy has taken root, an ecosystem of new energy companies has sprouted in San Antonio. Global companies such as Korea-based OCI Company and Germany’s KACO New Energy have established operations in San Antonio, bringing brainpower and technical expertise to Texas in addition to more solar power.

What is New Energy?

Apart from cutting emissions and helping power suppliers satisfy increasingly stringent environmental requirements, embracing new energy and its accompanying technologies can serve as an economic boon to those communities that embrace it.

A Turn in the Road

CPS Energy recognized the potential of new energy technology and resources early on with the arrival of a new CEO, Doyle N. Beneby, from Exelon Corporation in 2010. Shortly after his arrival, Beneby faced a tough decision with wide ranging implications: Should CPS Energy spend half a billion dollars to add expensive upgrades to two aging coal plants, or invest the funds earmarked for those updates in a more diverse, clean energy portfolio?

For Beneby, the answer was clear. Rather than retrofi t the “old energy” carbon-emitting coal plants, he chose to redirect those resources to cleaner “new energy” investments. His plan also included leveraging the utility’s substantial buying power to create jobs, infrastructure, and investment in education from willing business partners – all while keeping rates among the most aff ordable and reliable in the nation, and mitigating risk through a more diversifi ed energy portfolio.

In light of the growing uncertainties with coal generation, CPS Energy was already looking to further diversify its generation mix. The utility set a goal to achieve 65 percent low carbon generation. The mandate: A holistic commitment to sustainability at the highest level.

CPS Energy also invested in a new combined-cycle, low carbonemitting gas plant at a time when gas prices were entering a period of historic lows, thanks to advancements in oil drilling technologies associated with the nearby Eagle Ford Shale.

• Reduce emissions by an amount equal to removing almost 1.5 million cars from the road.

• Fuel investment in the economy and education of San Antonio.

Finding appropriate corporate partners for this unusual venture, and negotiating successful agreements, were major undertakings given the newness of the sector and CPS Energy’s strict purchasing requirements.

Finding the ideal combination of newness and financial strength was challenging. Start-ups typically do not look to municipal utilities as business partners in Texas. The fi rst winning candidate company (which turned out to be OCI Solar Power) also needed a progressive approach, a solid business plan, and a good chance for long-term sustainability.

If CPS Energy were to dive in long-term into a quarter-of-a-century partnership with a NEE company for 400 MWs of power, it would up the ante by also insisting on support for local educational initiatives as part of the program. Investments in STEM fields directly related to developing CPS Energy employees for the future became part of the requirements.

Ultimately, the NEE-OCI Solar Power contract outlined a partnership that would result in:

• An N-type manufacturing facility in the San Antonio area that would produce solar power plant components.

• More than $100 million in capital investment.800+ jobs with an annual payroll of nearly $40 million.

• A 25-year power purchase agreement for up to 400 MWs of solar generation.

For example, the massive 400 MW power purchase agreement with OCI Solar Power, known as The Alamo Project, is broken into nine solar farms over fi ve years. This allowed OCI Solar Power to ramp up its workforce, production, and facilities while getting its consortium partners in place.

Environmental groups like the Sierra Club became advocates. The Environmental Defense Fund called the plan “among the most progressive in the country. ” Educational organizations praised the inclusion of STEM funds for elementary and secondary schools, as well as colleges and universities. CPS Energy customers appreciated the environmental opportunities, and the community supported the clean tech job development potential.

Dr. Steven Nivin, assistant professor of economics at St. Mary’s University (San Antonio), chief economist of the SABER Institute, and former chief economist and industry development manager for the City of San Antonio, explained that creating a vibrant ecosystem of new energy companies by leveraging public sector buying power results in ‘sticky assets” that pay off for generations. Dr. Nivin authors a quarterly status update on NEE progress. “The education, trained workforce, labor exchange, and brainpower dividend that results from an initiative like this pays off for the community for generations,” said Dr. Nivin. “Educated, trained workers are the annuity that never ends.”

As a result, these companies have opened up manufacturing facilities, corporate headquarters, and local offi ces. Companies that have established corporate headquarters include Consert Inc., GreenStar, and OCI Solar Power, along with suppliers for OCI, which include Mission Solar, Sun Action Trackers, Mortenson, and KACO. Companies with local offi ces include Silver Springs and Landis+Gyr. Manufacturing facilities have also been established by Mission Solar, KACO, Sun Action Trackers, and GreenStar.

The message: While local and regional government agencies and economic development organizations can and should play a vital role in economic development, local utilities can and should also play a signifi cant role, not only because they can bring additional resources to the table, but because they, like everyone else in the region, end up benefi ting.