New Efforts to Integrate Renewables into the Grid 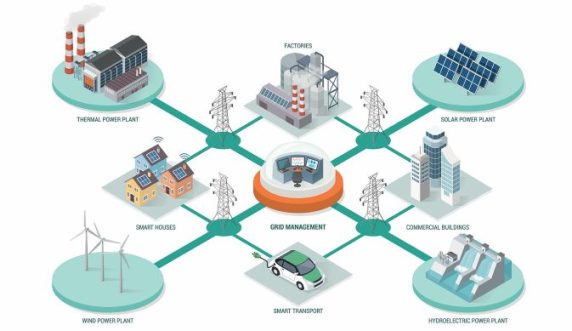 One of the roles of the U.S. Department of Energy’s Office of Electricity (OE) is to lead the DOE’s efforts to ensure that the nation’s critical energy infrastructure is secure and able to recover rapidly from disruptions.

“Microgrids – localized grids that can disconnect from the traditional grid to operate autonomously – have emerged as a promising means of increasing grid reliability and resilience,” said the DOE. “One of the key challenges in the widespread adoption of microgrids is the ability to operate multiple interconnected distributed energy resources when challenging operating conditions such as sudden load and generation imbalances arise.”

In working to address this and related challenges, researchers at Pacific Northwest National Laboratory (PNNL) have developed a model for a device that could improve how well renewable power sources can be integrated into the bulk power system.

The device, a grid-forming inverter, converts direct current (DC) electricity produced by sources such as solar, wind or batteries, to alternating current (AC).

The model devised by PNNL engineers is designed to allow utility operators to test how to safely add new power sources to the grid in a way that increases power system resiliency and stability.

Since that time, and building on that work, a PNNL team has been investigating how grid-forming inverters can affect large-scale transmission and distribution systems.

The PNNL researchers developed the generic droop-controlled, grid-forming inverter model for transmission system studies. That model specification was recently approved by the Western Electricity Coordinating Council’s Modeling and Validation Subcommittee, making it available to be integrated into commercially-available grid simulation tools used by thousands of utilities

UNIFI is a multi-year effort to create an ecosystem for grid-forming inverters that is led by National Renewable Energy Laboratory (NREL), the University of Washington, and the Electric Power Research Institute (EPRI).

The PNNL researchers’ goal is to work with UNIFI to unify the models of various grid-forming technologies and their diverse applications in power systems.

“To achieve the national targets of clean electricity and decarbonized economy, inverter-based renewable generation will be an essential part of the future energy mix,” said PNNL. “The inverters will fundamentally change power system dynamics and thus require new approaches to model and simulate such a system.”